According to Microsoft’s newest report.

Hybrid is the current and future of work.

But it is a difficult model to get right.

Here are three shifts that employers need to make based on Microsoft's data.

Hybrid work is the dominant working model. It allows employees to split their time between remote locations and the office; the best of both worlds for many.

But implementing a successful hybrid model is much easier said than done – while employees are keen to continue to reap the benefits of flexibility, many leaders are still yearning for the office life of 2019, according to the latest report from Microsoft.

Instead of focusing on the past, employers need to look to the future and figure out the balance between business and employee needs. Ultimately, thriving employees are what will give organizations a competitive advantage in today’s dynamic economic environment,” wrote Satya Nadella, Chairman and CEO at Microsoft.

The report surveyed 20,000 employees globally, as well as analyzed data from Microsoft 360 and LinkedIn, and found that that are three urgent changes that businesses must make to thrive in the hybrid current and future of work.

Microsoft’s report found that the primary challenge employers are facing in the hybrid world of work is measuring worker productivity.

Despite numerous studies showing that employees are actually more productive when working from home or in a hybrid model, leaders are struggling with the fact they don’t have visibility about what employees are working on, and how hard they are working, when teams are distributed across different locations.

While 87% of employees surveyed by Microsoft said they were productive – productivity signals on Microsoft 365 are also increasing significantly – 85% of leaders say hybrid makes it challenging for them to be confident that their team are working hard. 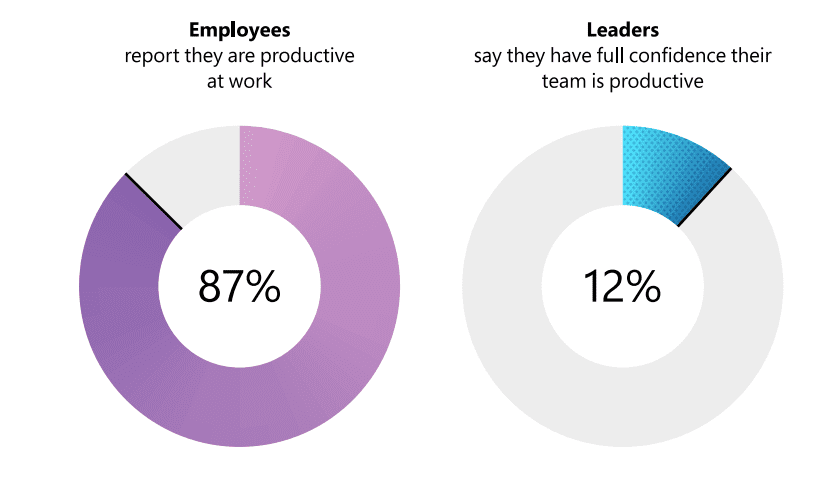 Microsoft’s research found that hybrid managers are more likely to struggle to trust their employees to be productive (49% vs. 36%). They also report that they have less visibility over the work their employees are doing (54% vs. 38%).

This situation is eroding trust between workers and their managers; workers know that they are working hard, but they feel increasingly pressure to ‘prove’ they are being productive. The irony is that this is a waste of time and is a distraction from productive work.

How do employers get out of this cycle of so-called productivity paranoia that “risks making hybrid work unsustainable”?

According to Microsoft, “leaders need to pivot from worrying about whether their people are working enough to helping them focus on the work that’s most important”.

This means being very clear and focused about employees’ objectives and key results (OKRs) and how they align with the business’s mission.

Those employees with clarity over their work priorities are almost four times more likely to stay at a company for two years, seven times less likely to think about looking for a new job and almost five times happier in their current role.

Of course, it is crucial that employees don’t do this re-prioritization exercise once, but that they keep an open dialogue with their employees around their concerns over the long-term.

Microsoft recommends that companies “Collect employee feedback regularly at organizational, departmental, and team levels to keep a pulse on your people—and empower managers and leaders to actively listen, coach, and make better decisions to improve the overall performance and wellbeing of their teams”.

Ultimately, employees that feel listened to, and know their employers are taking actions based on their feedback are more satisfied (90% vs 69%) and more engaged at work (89% vs 73%) – therefore they are twice as ls likely to stay in their job in the next year (16% vs 7%).

2. The office isn’t the only way to build relationships

As the pandemic has eased, many employers have been trying to figure out how to entice workers back to the office. 82% of decision makers surveyed by Microsoft cited this as a concern.

It seems that mandates are not the solution, and instead employers need to realize that social connection is key to bring people back to the office; frankly, it makes the commute worth it.

84% of employees said they promise of socializing with colleagues would encourage them to return to the office, while 85% said they wanted to build team bonds. 73% said they would go in more frequently if knew their direct team would be there, this rose to 74% if people’s work friends were going to be in.

This makes sense given that employees and business leaders know that social capital has been eroded by remote work. 68% of decision makers said that building connections had been a challenge during hybrid work; 51% of employees agreed that workplace relationships had been weakened while they were working from home. 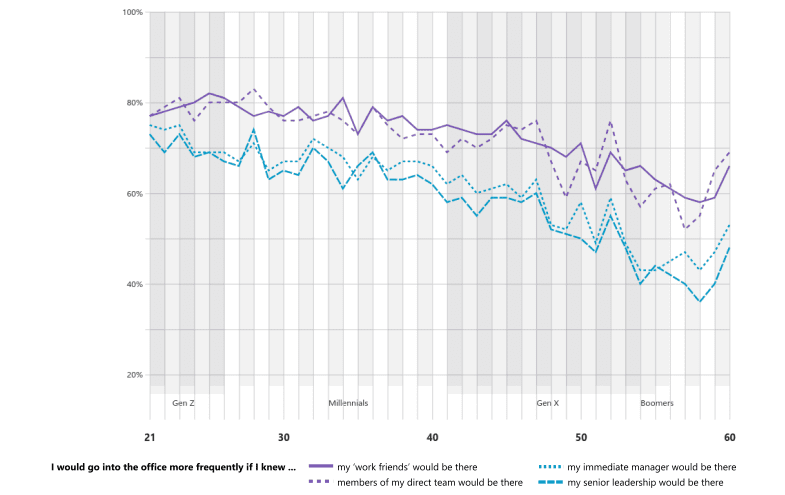 Microsoft’s research notes that while the office has a role to play in social connection – and employers should be aware of that when designing office-based working – technology has a crucial role to play in building workplace relationships.

Organizations need to use technology to communicate effectively and authentically with workers; employees list authenticity as the number one quality of a good manager (85%) and 89% of decision makers agreed. Good communication is how leaders can build trust and social connections across the organization.

The study noted that organizations must “build a digital employee experience to help employees stay connected to each other, to leadership, and to the company culture no matter where they’re working”.

They also need to “create a digital community with modern communication tools to fuel conversation, empower people to express themselves, and connect leadership and employees”.

3. Prioritize learning and growth at work

It is very clear that a lack of learning and development opportunities are a leading cause of the ‘Great Resignation’. Employees are not just leaving their jobs for more money, but because they want the chance to learn new skills.

This fact is confirmed by Microsoft’s latest research. 56% of employees and 68% of leaders said they don’t have enough growth opportunities to stay long-term.

55% employees say that the best way to learn new skills is to change company; this rises to 69% for executives.

Two in three told Microsoft they would stay longer in their jobs if it was easier to change jobs internally – the situation as the same for three in four people managers.

Interestingly, employees aren’t only interested in promotions – in fact, they see lateral moves as a better way learn and grow.

68% of employees and 77% of decision makers said they would rather make a lateral move that offers new skills than a vertical move that has fewer learning and development opportunities. 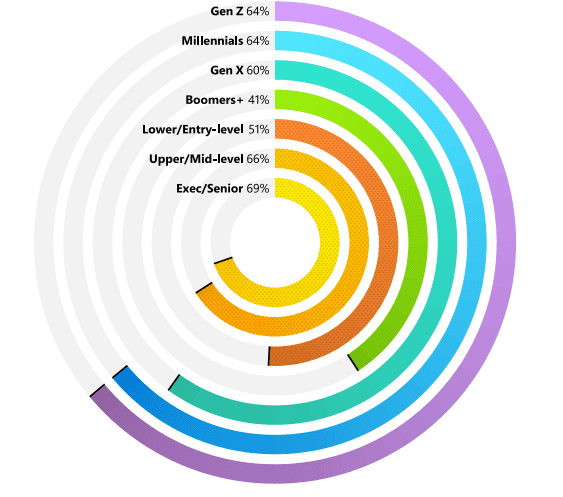 Therefore, “rather than ignore or fight these trends, the best leaders will prioritize learning and development to help both people and the business grow”, noted Microsoft.

Ultimately, learning and development is the primary driver of great work culture – it has risen from position nine in 2019.

The actions employers need to take is to “make learning and growth core to employee experience” through investment and making learning possible in the flow of work.

It’s also crucial that employers “recognize that people want opportunities not just for promotion but to broaden their skills. Organizations need to make internal mobility a key priority and help employees view their career as a climbing wall or playground, rather than a ladder”.

Are you ready to make these pivots and create a thriving organization?