According to European data from Figures.

The gender pay gap is 22% globally, and progress is glacial.

One solution is to embrace salary transparency.

Find out why from salary benchmarking platform Figures.

Diversity, equity and inclusion has been climbing the HR agenda over the past few years.

While there has been lots of talk about making workplaces equitable and fair, progress has been slow.

There remains a lack of women in senior leadership roles and there are enduring pay gaps, particularly around gender.

According to the UN, globally, women earn 20% less than men – this means that for every dollar a man earns, a woman ears 77 cents. At the current rate of progress, it’ll take 257 years to close the global gender pay gap.

This situation is not only bad for women and their economic freedom, but it is bad for society and for the global economy as a whole.

Diversity is good for business, so it is urgent that companies take action to identify the scale of their inequality, and then address it.

How to remove the gender pay gap

While there are many routes that employers can take, eliminating any discrepancy in pay based on gender is a very impactful way to show once and for all that everyone in your workplace is being treated fairly.

But where should employers start?

Research by compensation benchmark platform Figures has identified the crucial role that company transparency over salaries play in lowering the gender pay gap.

Figures founder and CEO Virgile Raingeard tells UNLEASH: “We’ve had a strong intuition for some time that there could be a direct link with pay transparency and the gender pay gap.

“The findings from our latest report confirm this – being more open about who is earning what can lead to more equitable compensation across the board.

“The results show that pushing for pay transparency should be a priority amongst companies and lawmakers, to help close the gender pay gap and to strive for a more equitable world.”

Figures surveyed 493 tech companies in the UK, Germany and France that use its platform. It looked at three types of salary transparency: compensation policy, salary ranges and grids (aka the internal pay structures) and what each employee earns.

In terms of adjusted pay gap (aka the gap between women and men in the same role and the same location), those employers who weren’t transparent on any of the three metrics had a 3.5% pay gap.

This dropped to 2.4% for those with transparency on their policies, and then to 2% for both transparent policies and a salary grid.

Most impressively, for those companies with full transparency – aka in their policies, salary ranges and individual salaries – they had a 0% pay gap.

The issue is that only 12% of the companies surveyed by Figures were in this bracket. 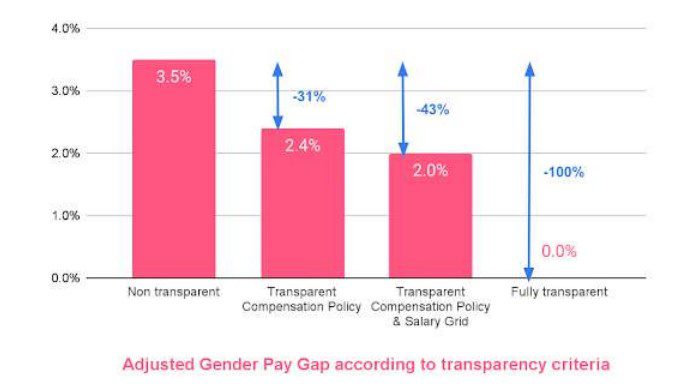 For non-adjusted pay gaps, which are ingrained and organization-wide because they come from barriers facing women being promoted into more senior roles, transparency on those three metrics also has an impact on pay, albeit a less dramatic one.

Completely non-transparent companies have a 22% gap, but this drops to 15% for fully transparent employers. 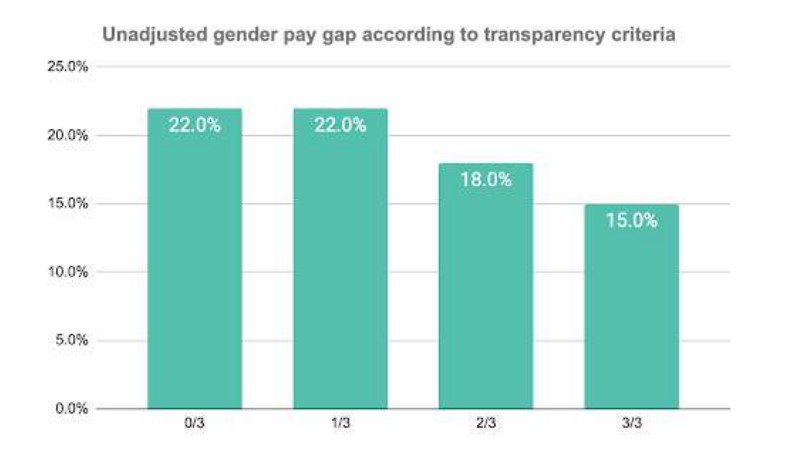 “However, efforts towards a greater representation of women in high level positions should not be forgotten: even if transparent companies seem to be a bit better at this, the efforts are still largely insufficient to reach a perfect parity.”

Ultimately, companies who want to have truly equitable workplaces – and to reap the benefits from that – need to do more than just fix their pay gap (and not just gender).

Employers must also look at their internal promotion policies. They need to ensure they are creating working environments where everyone can thrive, no matter their gender, race, sexual orientation, age or disability.