Private businesses have seen a huge increase in workers, according to ADP.

But the fight for talent isn't over yet.

When millions left the US workforce in 2021, many were concerned about how businesses would continue to thrive. As a result, the ‘Great Resignation’ led to many companies rethinking their financial and benefit offerings.

The success of these changes can now be revealed. The ADP National Employment Report has found that private sector employment in the US increased by 807,000 jobs in December.

The data backing up these numbers come from the payroll information provided by 460,000 US clients employing nearly 26 million workers in the country; ADP measures the change in total nonfarm private employment each month on a seasonally-adjusted basis. 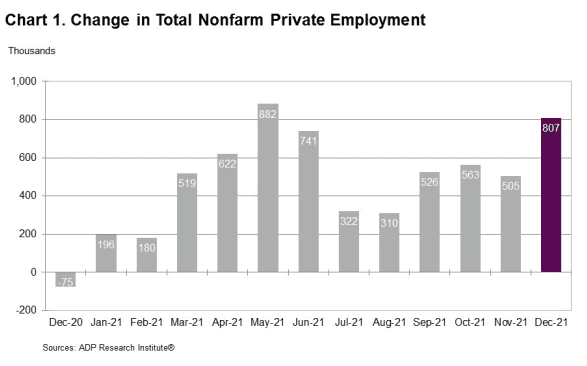 Unemployment benefit claims also declined in December 2021 according to the US Department of Labor.

The Department of Labor reported that across December the average amount of insured unemployment claims was 1,798,750, a decrease of 61,250 from the previous week’s revised average. This figure is the lowest level of average claims since March 14, 2020, when it was 1,730,750.

Despite this positive growth in work in the private sector and reduced unemployment insurance claims, there may still be issues ahead.

Attracting and retaining employees in 2022

Speaking about the data in the ADP report, Nela Richardson, chief economist at ADP, commented: “December’s job market strengthened as the fallout from the Delta variant faded and Omicron’s impact had yet to be seen.

“Job gains were broad-based, as goods producers added the strongest reading of the year, while service providers dominated growth.

With the situation surrounding the Omicron variant still developing, there could still be an impact on how companies operate and this could lead to more significant dips in employment.

Additionally, it is worth being wary of the changing expectations of workers that could impact retention rates.

It is evident that businesses still need to work on their offerings to re-attract or replace nearly 4 million workers, identified by Richardson and the ADP, who left private businesses over the course of the pandemic and have yet to return.

However, the approaches taken by companies to become more appealing vary greatly. Some have increased pay, others have offered flexible working, and the likes of Amazon and Walmart have improved their education bursaries.

Finding the right path will be personal to each company, but it is clear that even with more people returning to work, new standards have been set and employers need to match them to get the right talent.