How to break the cancer taboo at work

According to two-time cancer survivor and author Sarah McDonald.

Cancer affects tens of millions of people worldwide every year.

Yet people feel uncomfortable talking about cancer at work.

Find out from Sarah McDonald, a two-time cancer survivor and ex-chief of staff at eBay, how to look after your employees better.

According to the World Health Organization (WHO), 19 million people across the world were diagnosed with cancer in 2020. Tragically the WHO also found that in 2020 10 million individuals lost their lives to these deadly diseases.

Despite these statistics, and the physical and emotional havoc that cancer diagnosis and treatment wreak on patients and their families, cancer remains a taboo in the workplace.

Research by AXA PPP healthcare shows that only a fifth of managers who had team members with cancer discussed their illness with them – this is because they were unsure how to broach the subject.

While 90% of 1,000 cancer patients surveyed by the Institute for Employment Studies said they were treated well when they had cancer, they didn’t receive sufficient support, particularly when returning to work after treatment.

41% said they needed a reduced workload because their chemotherapy treatment impacted their ability concentrate, and 32% felt they needed coaching on how to return to work.

Respondents noted they still felt guilty for taking time off for their cancer treatment, and they were worried that they might be a burden to their colleagues when they returned to work.

These statistics are concerning, but what can employers do to rectify the situation and better look after workers with cancer, as well as employees who are caring for family members going through cancer treatment?

On the back of the publication of her book ‘The Cancer Channel’, two-time cancer survivor and former eBay chief of staff Sarah McDonald shares her personal experience and advice in an exclusive UNLEASH interview.

Allie Nawrat: Let’s start by talking about your personal experience of cancer and the workplace. During your cancer diagnoses, how did your manager, the HR team and the wider leadership team at eBay support you?

Sarah McDonald: The first thing I was told when I notified my manager and HR business partner that I had been diagnosed with cancer was: “Go home. Get the treatments you need. Don’t come back until you are healthy. We’ve got you.”

It was incredible and it is (sadly) unusual for many employees at other companies. At eBay, I was treated with care, compassion, and respect.

They removed one of the largest stressors for many people (especially in the US) who are diagnosed with a life threatening disease – which is the fear of loss of job – which means both loss of income and insurance to cover the astronomical costs of treatment.

I am (still) so grateful to the team at eBay who gave me those assurances because in the midst of all this terror of a cancer diagnosis and the treatments I was about to undergo – I didn’t have to worry about how I would pay for all of it. 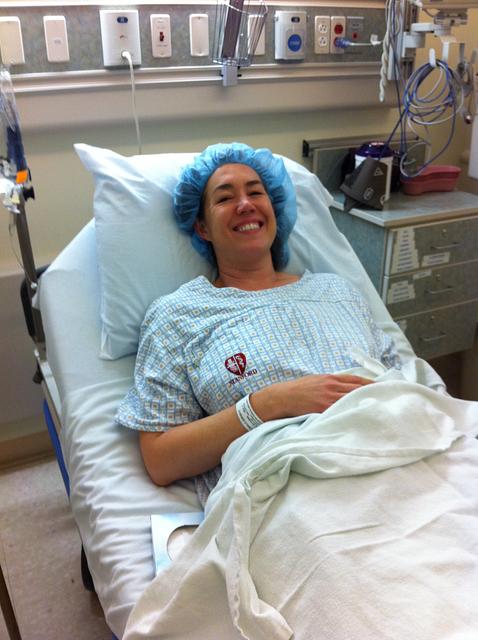 Sarah before going into surgery.

And I knew that should I survive the treatments – I had a job to return to. It was amazingly comforting. That was the single most helpful thing the people at eBay did – removed the fear of loss of income and insurance.

AN: Do you think eBay could have done more to support you during your diagnosis and treatment? Is anything they should have done differently to stop you resigning after you returned to work post-cancer treatment?

SM: Actually, I think they were tremendous at every turn and by “they” I mean every person I interacted with during my year of cancer. People were respectful and compassionate and responsive when I had a question or needed them to do something for me.

Two other remarkable things the head of HR (Kristin) did were:

She was a lifeline to what I called ‘the isolation of cancer island’. When you receive a diagnosis like this you feel like you’re all alone – on an island away from everyone who is still on shore living their lives – and Kristin’s texts made me feel less alone and made me feel cared for.

My decision to resign from eBay was one of the hardest ones I’ve made in my career thus far in great part due to the amazing support I received when I had cancer.

Ultimately, I left because the commute had grown to an unmanageable length (two hours each way) – it was too much time out of my day just getting to my job. And at the time (2018), it was unusual for eBay employees to work remotely and so we didn’t have the level of video conferencing software needed to enable it.

Funny enough, the pandemic accelerated (or necessitated!) companies figuring out remote work,  so the issues that led me to resign are in many ways resolved now.

AN: You held a senior leadership position at eBay – do you think your seniority and your personal relationships with senior leaders played a role in their level of support?

SM: While yes, I was a senior person at the company, I don’t believe the treatment I received was unusual. I observed many others diagnosed with life threatening diseases treated with the same compassion and grace that I was extended.

I write of another woman (Sarvenaz Madi) in the book who was diagnosed around the same time I was – and she received similar support from her manager and HR business partner. I also know of someone whose partner died of cancer who received simply amazing support and grace from his colleagues and HR business partner while he grieved. I have other stories beyond those two – but those are the two that stand out to me right now.

I think that employees observe (and talk with one another about) how their colleagues who are in crisis are treated. It signals to everyone in the company what kind of dedication and compassion the company has to its employees.

AN: While you had a good experience, that isn’t the case for everyone. What taboos remain around cancer and the workplace? What is your advice for employers on how to break these taboos and better support their employees with cancer?

SM: The first taboo we need to break is the fear of talking about cancer. Cancer is still a subject often spoken of in hushed tones, as if it is a secret. As if we believe the person who has been diagnosed has done something wrong and is to blame for their cancer.

I think it is also not discussed because people are afraid to say the wrong thing and so they decide to say nothing at all, and I think that is a problem too.

My number one advice to HR professionals / managers / leaders / colleagues who have a teammate / friend / family member who has been diagnosed with a life-threatening disease is to say “I’m sorry you are going through this. It must be so hard.” Then listen.

Create a safe space for this person to open up about what is going on. And if the person doesn’t open up – perhaps because they are too scared to speak about it or are afraid that if they speak about it, they might cry.

Take the cue from that person. If they want to talk – let them talk. If they don’t want to talk, respect that silence.

Next you might say: “I want you to know that I (we) care about you and want to be supportive of you while you undergo your treatments. Do you have an idea yet of what that might look like? If not – that’s totally fine – but I want you to know that it is our intention to support you to the best of our ability during this time.”

It is very possible that the person with cancer doesn’t yet know what their treatments will look like – whether they’ll be able to work while undergoing treatment – and/or what their outcome will be. That is a terrifying place for any human to be in.

I would argue that your goal in this moment is simply to convey to this other human that their employment (and by extension their insurance coverage) is not one of the items they should worry about while they undergo treatment.

Believe me, they will have enough to worry about with appointment scheduling, doctor coordination, treatment side effects, insurance coverage follow up, and emotional regulation that the removal of employment fear is the single greatest gift you can give this other human.

Finally, you might say “I would love to occasionally check in on you over the next couple of weeks and months to see how you are doing – and ask if there is anything (more) we can be doing to support you. Would that be ok?”

A life-threatening diagnosis is a very isolating event. An offer to check in occasionally can be that lifeline to cancer island that I spoke of previously. As long as the offer to check in is given with the pure intention of truly checking in on the wellbeing of another human – I think it can and will be received well.

Listen, I know employment situations and expectations may differ from company to company based upon industry or job responsibilities. But I do believe we need to remove the stress associated with fear of loss of job (income) and insurance coverage for people who receive a life-threatening diagnosis.

There are a chilling number of stories I have heard of people who forgo cancer treatments due to the cost associated with them. In these cases, the patient has lost their job and their insurance – and rather than personally take on astronomical amounts of debt – they choose to let their disease run its course rather than bankrupt their families. I just refuse to believe it has to be this way.

AN: Beyond leaders, manager and HR teams, what can colleagues and team members do to support others going through diagnosis, treatment and return to work after cancer?

SM: The question I am asked more than any other: “What can I do for this person I know who was just diagnosed?”

The single most important thing I tell people is: “Show up”. Check in. Call/write/text/show up in person. What your colleague (or loved one) really needs most right now is to know they are cared for and they are not alone. You don’t have to check in every day but do check in consistently – even if it is simply to say “I am thinking of you.”

This “show up” rule applies at the beginning, middle, and end of cancer treatments, as well as the return to work. Each of these stages of treatment comes with its own set of challenges and vulnerabilities for the cancer patient, none of which the cancer patient has had any experience with or could have anticipated prior to simply going through that stage.

And so how can you know what they are going through or how you can support them or how you can be sensitive to their needs if you don’t ask. So ask. Call, write, text, email, drop by their desk (preferably with ice cream).

If you are looking for more information or support about living with cancer, here are a couple of useful links.