Recruiters at highest risk of layoffs

This is according to data from Revelio Labs.

A looming recession is pushing employees to look at their finances.

This is pushing some to make layoffs.

Find out why millennials and recruiters are most at risk.

It is over a year since the ‘Great Resignation’ began. On average, four million workers have left the workforce in the US since last summer; there were two peaks of 4.5 million hitting in November 2021 and March 2022.

This competitive labor market has panicked some employers – they have been grappling with quickly replacing those who have resigned, as well as figuring out how to avoid losing more workers.

But now the bubble is starting to burst. While employees are still quitting at record rates, some companies that overextended themselves when hiring are being forced into hiring freezes and layoffs.

An online aggregator called Layoffs.fyi estimates that almost 80,000 jobs have been cut this year – and that is only in the tech sector.

In light of this, Revelio Labs decided to dig into the layoffs and try to find out the demographic trends around job cuts – the analytics company spoke to 17,000 employees who have been laid off since March 2022, and used their LinkedIn profiles to find out more about their job history.

Recruiters, millennials, and new hires are at risk

Revelio Labs’ data shows that recruiters are most at risk of layoffs.

This makes sense because during the ‘Great Resignation’ companies have been growing their hiring teams in order to keep up with the company’s demand for new workers. But now with hiring slow downs and freezes, there are too many recruiters on payroll.

Apple and Okta are two examples of companies that have laid off hiring teams in this economic crisis.

According to Business Insider, job openings for HR professionals increased 130% during the pandemic – but they have now tumbled by about 40%. 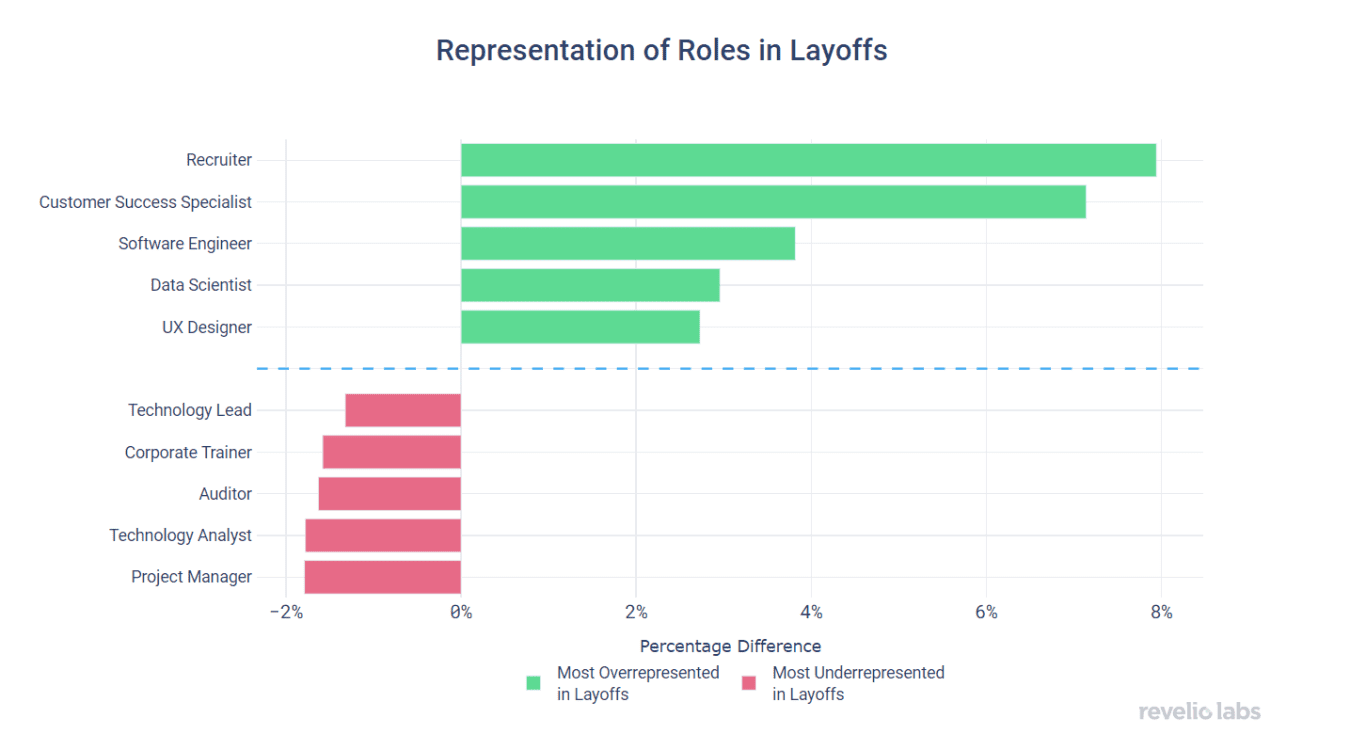 In addition, the generation being hit hardest by job cuts are millennials. While they make up 79% of the workforce, they represent 94% of the layoffs. This age group is one of the demographics leading the ‘Great Resignation’, according to other Revelio Labs data and research by Lattice.

So has job switching, and the large salary hikes they received in their new roles, put a target on millennials backs? Revelio’s data further found that the average tenure of those being laid off is a year, which means they started during the pandemic – those who were in their jobs pre-COVID-19 were much safer from layoffs.

These findings are a warning to employers and HR teams. The ‘Great Resignation’ triggered unsustainable hiring and retention practices – company’s cannot keep hiking wages forever to attract new talent – and now employees are out of a job, and HR teams are facing the hard, onerous task of cutting jobs.

As the ‘Great Resignation’ continues in a potential recession and cost of living crisis, employers need to think carefully before making snap decisions about their talent needs.