The UK labor market rebounds, while US struggles

But the ‘Great Resignation’ is ongoing on both sides of the Atlantic.

In the past week, the US and the UK have published labor market data.

While the UK labor market is recovering, the story is a little different in the US. Despite this, both countries are grappling with labor shortages and the 'Great Resignation'.

What mush companies to do avoid losing their top-class talent?

The UK’s labor market is continuing to recover, according to the latest figures reported by the Office for National Statistics (ONS).

Employees on the payroll increased by 207,000 in September to a total of 29.2 million. This means the number of people in jobs in the UK has recovered to pre-pandemic levels.

This is slightly higher than the 0.3 percentage point increase in employment rate for the prior quarter reported in July.

Unfortunately, things are not looking as promising across the pond in the US.

While the US Bureau of Labor Statistics figures for September found there was a 194,000 monthly increase in nonfarm payroll employment. Dow Jones economists had predicted that the jobs market would rebound in September with an additional 500,000 jobs being added.

Although the number of unemployed people fell by 710,000 in September to 7.7 million, this remains 2 million higher than February 2020 figures and the US labor force participation rate remained little changed on the rest of 2021 at 61.6%.

The ‘Great Resignation’ is real

The ONS and BLS figures also suggested that the ‘Great Resignation’ being discussed widely in the media is real and is not going anywhere.

In the UK, for the second consecutive month, the three-month average job vacancies exceeded 1 million. For July to September 2021, the vacancies reached a record high since records began of 1,102, million job vaccinates. This is an increase of 318,000 on January to March figures and was seen 12 of 18 sectors measured.

This means that there are now 3.7 vacancies for every 100 jobs, which is a record high. 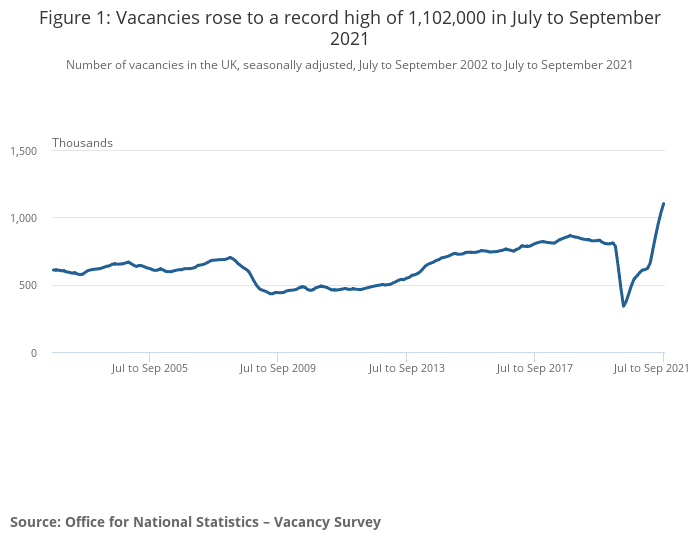 While the ONS noted that the growth in vacancies was slowing down – they only increased by 239,000 jobs (27.7%), compared to 242,000 (38.9%) in the last quarter – there are still escalating numbers of vacancies across most individuals.

The issue, according to the ONS, is that the number of vacancies are often being caused by employers finding it more difficult than usual to fill their open roles.

This is a particular concern for the hospitality industry, which is almost three times as likely as other industries to be experiencing challenges in filing vacancies. It is also a major concern for bigger businesses according to the ONS.

Total separations also increased in accommodation and food services (+203,000) due primarily to an increase in quits (+157,000). The quits rate in this industry is at a new high of 6.8% as covid caseloads surged in August.

This suggests that employees are clearly more than willing to leave their jobs, even though there are not lots of jobs for them to actually apply for.

Economic research director at Indeed Nick Bunker told CNBC: “This is quite a deflating report.

“This year has been one of false dawns for the labor market. Demand for workers is strong and millions of people want to return to work, but employment growth has yet to find its footing.”

Losing workers and not being able to fill open roles is a serious concern for companies across the world. Not only are employees companies’ biggest asset, but the recruitment process is incredibly expensive and time consuming.

So, what must companies do now to avoid the ‘Great Resignation’ and help the labor market further rebound in the UK and the US?

Adecco regional president of Northern Europe Alex Fleming commented: ““Another month of increased employment, on the tail of the furlough scheme ending, demonstrates that the candidate led environment that jobseekers have been experiencing recently is showing no signs of abating.

“So long as candidates remain in the driving seat, businesses will need to pull out all the stops to attract and retain the talent they so desperately need.”

It seems that businesses that prioritize their employee value proposition, particularly around wellbeing and flexible working, will beat out their competition in the war for talent.

D2l director of corporate learning Alan Hiddleston added: “Businesses are facing one of the most complex talent shortages to date. The pandemic and remote working economy have revealed the state of the digital skills deficit.” This is even more stark in the UK as a result of Brexit and new European visa requirements.

Hiddleston continued: “At the same time, many employees have adjusted their priorities – seeking improved work-life balance and further opportunities to grow and reach their full potential.

“Burnout has also been a challenge, with reports of employees working longer hours and becoming dissatisfied in their roles.  Some of this can likely be attributed to lack of training, opportunities for progression, or employer flexibility.”

Now is the time for employers to step up and develop learning and development programs that are online, easily accessible, individualized to the needs of the learning and relevant to the skills of the future.