Pay parity is far from being achieved across the world.

Women and people of color are regularly paid less than their male counterparts.

UKG is committed to doing something about it. Will others do the same?

Human capital management company UKG has its finger on what employees want in the future of work.

Hot on the heels of launching a new employee experience tech offering – which is crucial to companies surviving and thriving amid the ‘Great Resignation’ – UKG has now committed itself to pay equity at work.

Unfortunately, even in the 2020s, there is still a need to talk about pay equity and pay parity.

This is because women and people of color are regularly paid less than men across the world.

“The Gender Pay Gap is not a myth – it’s real! It’s a global problem with over 145 countries having documented a gender pay gap,” said Jungle HR’s Teresa Boughey in an interview with UNLEASH.

Also, worryingly, COVID-19 has made the situation worse as women, for instance, have been the most likely to quit their jobs because of other caring responsibilities, or because they work in more unstable sectors.

Closing the gap with UKG

There is an urgent need for companies to work harder to tackle pay inequity. UKG chief belonging, diversity and equity officer Brian Reaves commented: “As an organization whose purpose is people, we know that an individual’s income impacts every aspect of life, including their health, wellness, family, and future.”

“Through the UKG ‘close the gap’ initiative, we seek to enact change related to pay inequity and encourage others to join the fight for more inclusive, fair, and unbiased workplaces,” continued Reaves.

So, as part of its ‘close the gap’ initiative, UKG has committed to contributing $0.18 (the current gender wage gap) for every employee paid through its payroll system to pay equity initiatives and campaigns, like LeanIn and 9to5.

Given that 15 million employees are paid through UKG applications, the company is expecting to donate $3 million. 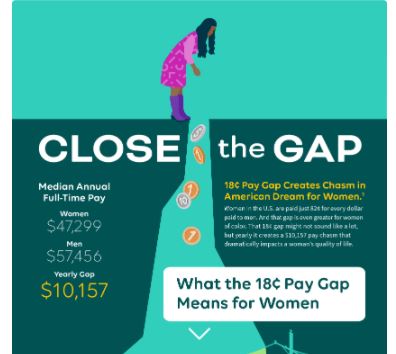 In addition, UKG is going to sponsor Harvard Business Review research, as well as launch its own awareness campaign.

The company is also calling on employers to sign its ‘close the gap’ pledge. Are you ready to tackle pay inequality head-on?