If employers want to thrive, according to London Tech Week’s Future of Work summit.

The event featured sessions with speakers from the likes of Multiverse, Microsoft, Wiley Edge, the UK government and many more.

Here's a round-up of our key takeaways.

Last week was London Tech Week. It comprises a week of events where the business community comes together with government to celebrate the UK’s, and London in particular, thriving tech scene.

Across the five days, experts were invited to discuss the strengths, challenges and opportunities facing the UK tech scene.

But it was the Wednesday that was most interesting for UNLEASH (and you, our audience of HR leaders), because it saw the Future of Work Summit.

Throughout the day, tech leaders and government talked about the challenges facing the workforce and employers at the moment, particularly amid the highly competitive war for talent, which has been dubbed the ‘Great Resignation’.

D,E&I and the war for talent

The Future of Work Summit started with a keynote by UK Secretary of State for digital, culture, media and sport Nadine Dorries.

Dorries used the opportunity to call on tech employers to think about broadening their talent pool and hiring those from working class backgrounds (like herself). She argued that this approach could help in the ‘Great Resignation’ – now is the time to rethink where you are getting your talent from. 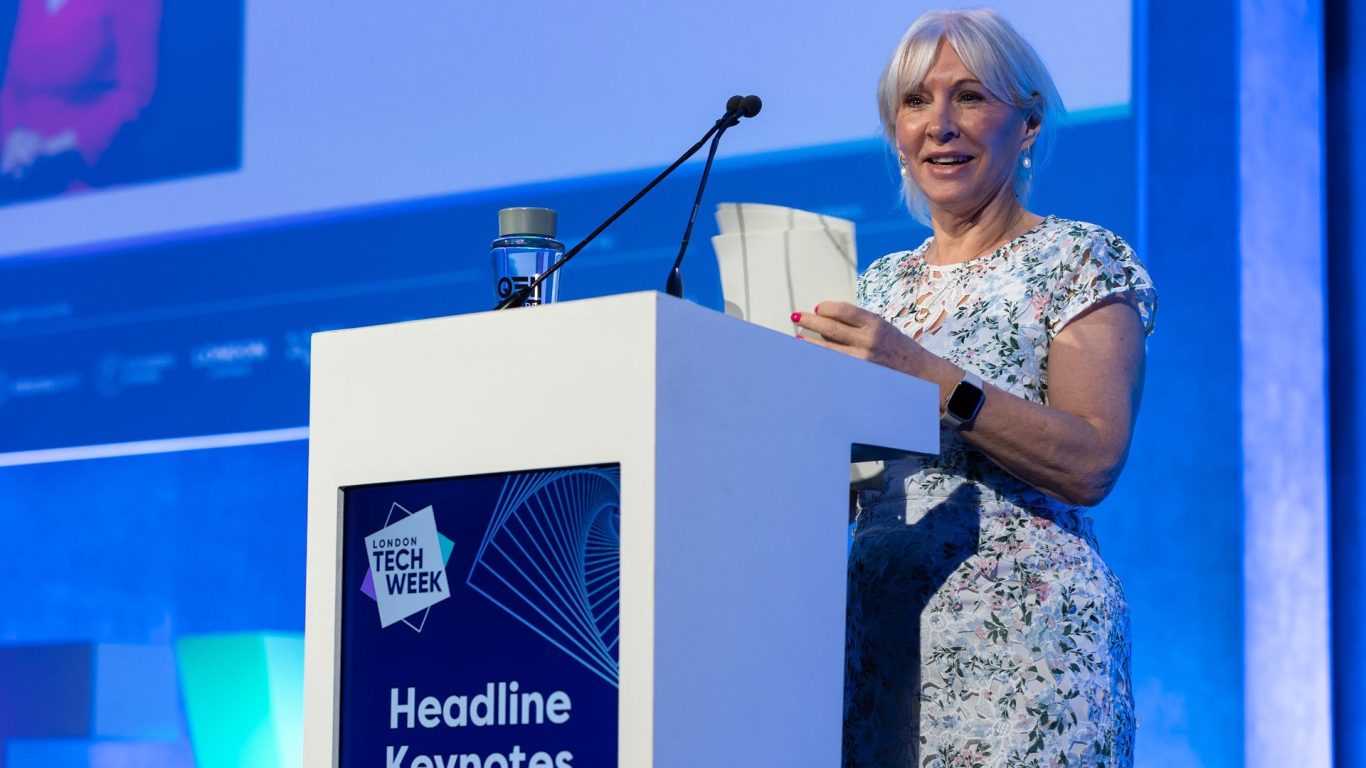 During a panel on tackling the war for talent, Euan Blair, son of former UK prime minister Tony Blair and founder and CEO of the UK’s first EdTech unicorn Multiverse, agreed that a solution was to broaden the pipeline of talent.

He argued that university must stop being viewed as the only route into professional jobs.

Instead, they should embrace apprenticeship programs if they want to access diverse talent and be able to digitally transform – Blair did acknowledge that his answer was pretty predictable given Multiverse is a apprenticeship startup.

But Wiley Edge’s COO Daniele Grassi, who was sat on the same panel, agreed with Blair. He added that many big employers use the reputation of universities to recruit talent, but university isn’t the only place to find great talent.

He used the analogy of Michelin star restaurants – these may be great places to eat, but other places without Michelin stars also serve amazing food and culinary experiences.

Grassi noted that rather than focusing on prestige of institutions when recruiting, HR needs to look at candidates’ potential. This is where soft skills come into play.

On a slightly different vein, Meera Raikundalia, co-founder of BYP Network, shared on the same panel as Blair and Grassi that part of the current issue is that referrals are a huge part of many companies’ hiring strategy.

But unfortunately, many people’s networks come from similar backgrounds to them, so it just creates homogeneity.

To tackle this, Raikundalia suggested that employers encourage their workers to expand their networks to include more diversity – she argued that employees want to be involved in creating more diverse and inclusive workplaces, but they may need support in order to do this effectively.

Another idea that Raikundalia had was no longer requiring industry experience – why is that necessary for all jobs? The challenge of doing this is it just circulates the same talent.

Instead, maybe it is time that companies hire from outside their sector, particularly as that can bring in fresh perspectives.

Blair added that when he was founding Multiverse in 2016, they did just this; they purposefully didn’t hire lots of people with experience in the apprenticeship space. This was because they wanted to transform the space, so they didn’t want to hire people who could be constrained by what had been done before.

Managers are the key to success

Other sessions throughout the Future of Work Summit focused on topics like employee experience, wellbeing at work, and inclusivity at work.

A major trend that kept cropping up was the importance of having good managers, and providing them with the right training.

In a panel about workplace wellbeing, Real’s founder and CEO Ariela Safira shared her view that managers are not sufficiently trained or equipped to support employees through mental health challenges.

Michael Acton-Smith, co-CEO and co-founder of Calm, agreed. He talked about how Calm has a “mindful managers” program. It aims to ensure that the right people are in management roles, and that you are training them correctly.

He continued that many assume that managers know how best to look after their teams, but they shouldn’t.

In another panel on employee experience, Charlotte Ibbotson, director of talent at Wiley Edge, echoed this. She noted that some people are meant to be people managers, and some people aren’t – neither is right or wrong, but employees need to be able to rely on line managers that are good at their jobs.

To move the needle on workplace mental wellbeing, JumpCloud’s Greg Keller added that senior leaders, especially the C-Suite, also needed more training to help them lead by example. If they don’t have a good work life balance and show that it is okay to take time off, why would employees feel empowered to look after themselves better?

The importance of good, well-trained managers also came up in a panel about the ‘Great Resignation’. Upskill Digital’s CEO and founder Gori Yahaya took the conversation back to culture and D,E&I by stating: “People managers make or break D,E&I strategy”.

“So if you invest in them, educate them, engage them, and help them engage your teams more effectively”, then employer can build the right culture to retain people, according to Yahaya.

Senior director of the modern work business group at Microsoft UK, Nick Hedderman, also talked about managers and leaders during his panel on employee experience.

Hedderman was asked about the challenge of proximity bias – and he noted that the solution comes back to leaders and managers.

“This is the era of a new type of manager, a new type of leader. One that measures people on their outcomes, not the hours [they worked], that looks at their contributions, how they’ve engaged with other people and how they showed up”.

COVID-19 Future of Work Learning and Development Strategy and Leadership