12m European jobs will be lost to automation by 2040

But 9 million will be gained in the green economy.

Mid-skill routine jobs are most at risk from AI and robotics.

Learn how upskilling and green jobs could help keep the European labor market on track.

Technology is fundamental to the world of work in the 2020s. But the digital transformation of the workplace is far from over; in fact, it is only just beginning.

Research by Forrester has found that automation, including robotics, artificial intelligence (AI) and machine learning (ML), is going to be a defining workplace trend in the next two decades.

This is because automation can help companies adapt to challenges and be more resilient in the future.

It can also help European companies to stay competitive amid the continent’s demographic timebomb; it is predicted that by 2050 the big five European countries (Germany, France, Italy, Spain and the UK) will have 30 million fewer people of working age.

Unfortunately, the company found that 34% of European jobs are at risk, and that 12 million jobs will be lost to automation in the big five European countries by 2040.

The jobs most at risk are mid-skill labor jobs primarily concerned with simple, routine tasks in sectors like retail, wholesale, accommodation, transport, leisure, and hospitality. These jobs make up 31%, this rises to 43% in Italy and 42% in Spain. 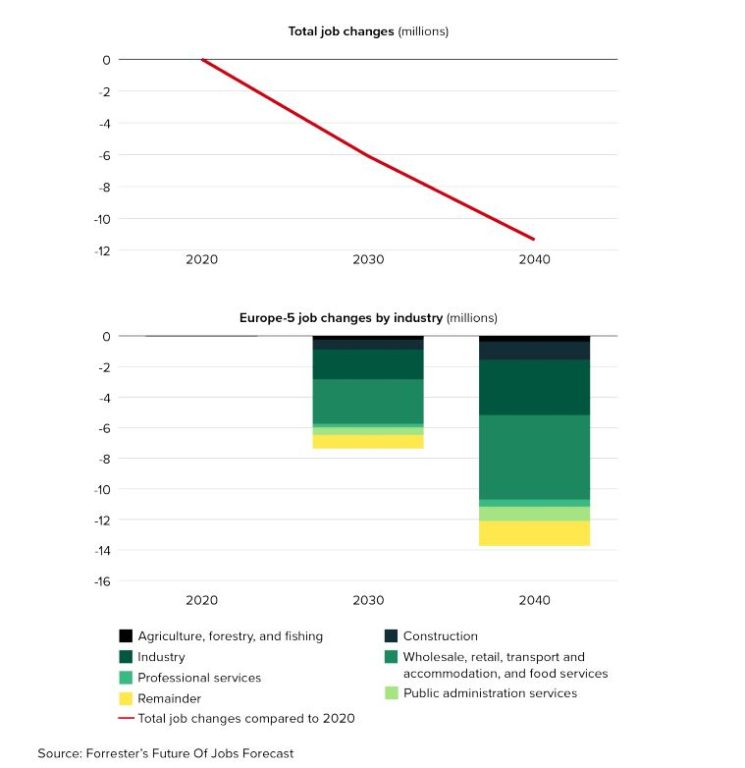 Despite the worrying news of jobs being at risk because of automation, Forrester found that a lot of European companies are not actually seeing AI or robots as substitutes for workers.

Instead, 28% of European employers see automation as freeing up human’s time to do other tasks.

Employers also envision a future where humans and machines work synergistically alongside one another and leverage their different capabilities successfully.

As a result, Forrester notes that success in the future of work will require European companies to rethink their attitudes towards skills and development.

There is a particular need for companies to focus on IT and tech upskilling – this includes introducing AI, ML and blockchain earlier into the school curriculum. Lifelong learning will also be essential as automation and technology continue to evolve and improve over the next couple of decades.

Talking about the future of work, Forrester principal forecast analyst Michael O’Grady commented: “European organizations are also in a particularly strong position to embrace automation because of Europe’s declining working-age population and the high number of routine low-skilled jobs that can be easily automated.

“Automation will subsequently become integral to how European governments and employers look at their competitiveness and manage their older demographic.”

The creation of green jobs

Forrester is also very clear that while many will lose their jobs over the next 20 years, new jobs will be created, particularly in the green economy.

According to Forrester’s report, there will be 9 million jobs created in green energy, particularly clean energy, clean buildings, and smart cities, by 2040. 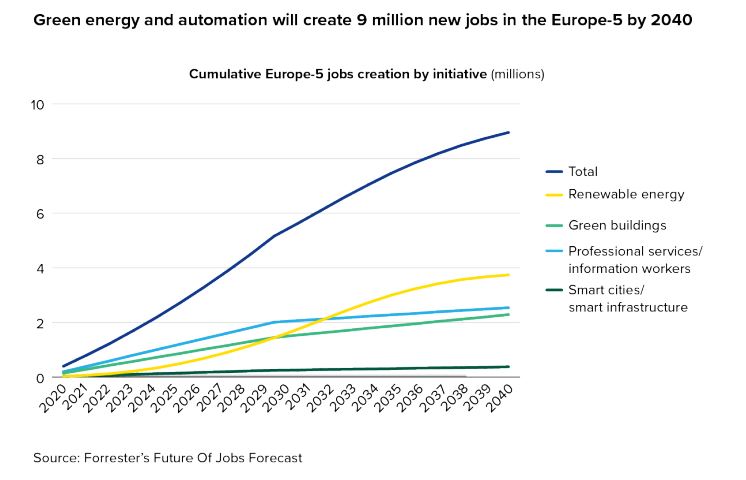 This is because the European Union (EU) has committed itself to investing in green jobs – this is part of its €1.8 trillion 2021 to 2027 investment plan and its commitment to be carbon neutral by 2050. The EU also plans to increase wind power jobs by 50% over the next decade.

It is clear that automation’s impact on the world of work in Europe is not linear. Automation will transform the future of jobs, rather than just put people out of work.