Diversity, equity and inclusion (D,E&I) is an increasing focus for many companies.

Diversely aims to help companies with this by changing ads, posting them, and anonymizing CVs.

We sat down with the co-founder of Diversely, Helen McGuire, to find out more.

Somehow we have already arrived at the penultimate week of our emerging tech series where UNLEASH speaks to participants of Veremark’s Workplace Accelerator. The series continues with a fantastic discussion about how to de-bias hiring and onboarding.

This week we were fortunate enough to speak to Diversely. More specifically, we spoke to co-founder and CEO Helen McGuire about her experience, inspiration, and what differentiates Diversely from other recruitment solutions.

While diversity, equity, and inclusion (D,E&I) is becoming an increasingly important topic amongst HR leaders, many are still grappling with the challenges of bias, particularly in hiring.

Issues of bias have been punctuated by record numbers of women and minorities leaving the workforce with no indication of when they will return.

McGuire has a unique perspective because she has approached the problems professionals are facing from her experience in the area.

McGuire explains how she and Hayley Bakker co-founded Diversely last year by bringing together their two different perspectives.

McGuire had worked in communications and created a women’s careers platform, called Hopscotch.work, in the Middle East and Asia that supported women back into the workplace. While Bakker is the ex-managing director of Girls in Tech in Asia.

Despite having high-profile clients within her women’s careers platform and over 80,000 members, McGuire explains it was “on a very ad hoc project basis, and essentially just wasn’t moving the needle and wasn’t really solving the problem that I set out to solve.”

She also wanted to help more than just women and expand her view to other marginalized groups.

To move the dial on diversity and inclusion, McGuire joined an accelerator before the pandemic hit. She knew that when she finished the program: “I wanted or needed to use tech in order to number one, solve the problem. And number two, make that solution scalable.”

This led to the partnership with Bakker and the founding of Diversely, a unique product that focuses on removing bias from onboarding.

McGuire notes that Diversely has two specific targets (use quotes when they are meaningful. “One is recruitment agencies – those that are being asked by their clients to find diverse shortlist, or simply, what is your process in finding diverse talent?“

In these instances Diversely provides the answer to questions about bias-free sourcing.

Additionally, McGuire explains: “We tend to work with businesses that are not so big that they have all of their HR processes already in place, but are not so small that diversity and inclusion hasn’t quite come into play with them yet.” 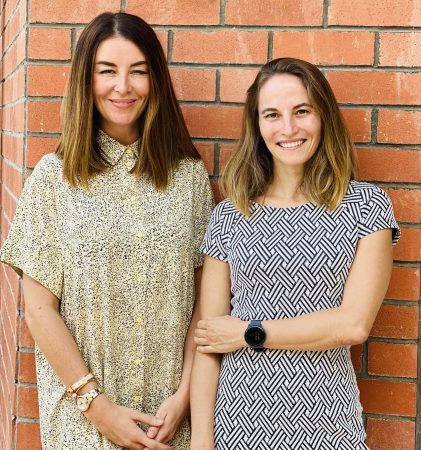 Diversely focuses specifically on hiring, and McGuire explains there are “Certain ways in which you select and onboard people”, which mean “you’re always going to have some kind of human bias.”

This bias is undoubtedly a recognized problem within the HR industry, but McGuire notes that Diversely is different to most HR tech tools because “we started with the end in mind”.

She expands: “We always set out to build a diversity and inclusion (D,E&I) platform, we didn’t set out to build HR tech for any other reason, neither of us come from an HR background. We built this platform to solve a specific problem around D,E&I and it just so happens that that falls into HR tech.

“In that respect, we differentiate ourselves from many of the other players in the market, who you now see kind of pivoting slightly or rebranding a little bit or changing their messaging, the tech is built with that end in mind, and therefore, does that job perfectly.

“That’s one thing: we don’t see a huge amount of competition in our space right now.”

McGuire continues: “Around the measurement aspect, the dashboard, the way in which we’re ensuring that businesses have diversity right at the top of their funnel, that’s key for us.

“Our belief is, if you don’t start with that, then by the time you get to onboarding somebody, how do you know whether you’ve really got the most diverse shortlist or person that you can for your business?”

McGuire goes on to note that the vast majority of job ads globally “contain some bias, and that is no huge surprise to us.”

She adds: “One of the things I used to do in my previous business was rewrite every single job ad that came to me.

“We had a job board that was obviously done to attract women to organizations, and every single job that came to me was not fit for purpose.

“It was written in a way that was simply non-inclusive, not just to women, but to many underrepresented talent groups.”

McGuire adds that frequently position posts fall into masculine phrases that dissuade those who are not heterosexual men.

She goes on to detail an internal experiment she held: “We rewrote a job ad with more inclusive [and] neutral language, essentially replacing some of that male language. And we had 70% more applicants and about four times more women applying to the job ad .”

Evidently, job adverts need to be reassessed. However, that’s only the start of the onboarding journey.

Diversely has found “that only 5% of businesses have any way of tracking, measuring, or understanding their diversity” in onboarding.

With this figure in mind, McGuire notes: “If you don’t understand how diverse you are at the very beginning, what your goals are, or whether you’re getting towards them, [then] there’s no way of knowing whether you’re improving or really where you need to go.”

Figuring out where you want to go is key for any department and D&I is no different.

In fact, McGuire notes that LinkedIn found that “there’s been a 60% increase just in the last year of people with D&I in their title.”

She adds that is not to say that these roles didn’t exist before, but D,E&I is “being taken more seriously now”.

Some companies are now “running to catch up on and say ‘hang on a minute, you know we have a D&I department, we [should] have budget around this.”

A key step in recognizing hiring issues is understanding that everyone has some inherent bias. McGuire explains: “Human bias comes into everybody’s lives on a daily basis. I’m as biased as anybody else. You tend to be attracted to those people that you identify with. That’s very normal on a human level. It’s very difficult to train that out of people.”

To make removing bias easier Diversely gets job ads to “places where underrepresented talent groups might be”.

The company also “takes out any kind of identifying factors in an applicant’s CV when they apply for the role.

“So essentially, what that is doing is allowing for a round of blind hiring, so that you are not then swayed by a name, a university, a school, a location.”

The future of Diversely

McGuire notes that working with Veremark’s Workplace Accelerator is giving Diversely the opportunity to evaluate its “value proposition and client target” while “looking at the messaging” of the company.

She adds that the program allows the company to look at its “tech in terms of things like data and legal compliance”.

On top of that, the network that the program introduces the company to could be invaluable in future rounds of funding.

It’s not only the future of the company that McGuire looks at with optimism. In terms of getting women into positions after the ‘Great Resignation’, she notes that: “One of the key things that stops women [applying for jobs] is a lack of flexible working”.

McGuire believes that new trends around flexible work hours that enable caregiving and childcare in work will allow this to change. Not only that, but with software like Diversely, company’s will be able to make a commitment to change.